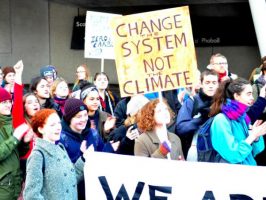 We are a proud people, in Scotland. To what extend varies from person to person, but it’s a common Scottish characteristic and one that, at times, is a hindrance when addressing political issues.

There are sections of Scottish society who will not accept any criticism of the Scottish Government and this prevents a healthy level of scrutiny over much of its policy.

We have developed a narrative that plays into our desire to be seen as a modern and progressive nation, but we need comprehensive political system change badly in Scotland, of the type described by XR Founding member, Stuart Basden recently.

After staging our mock Citizens Assembly and occupying the Scottish Parliament, the BBC sought comment from a Scottish Government source and true to form the response came back that:

“The UN has praised the Scottish Government for our progress in dealing with Climate Change”.

Let’s just take an unbiased look at that record.

The fairest measurement is CO2 per capita – this way small countries can be compared to large ones, in a robust and fair way.

Scots output net 4.7 tonnes of carbon dioxide (CO2) per person, per year, according to the cited data sheet (one page) from the Department of Business, Energy & Industrial Strategy (2016).

So, is Scotland in the top-ten least polluting countries per capita?

Scotland lies at 147th out of 217 bespoke countries or territories.

If Scotland is in the worst third of countries for CO2 pollution, why does it get so much praise?

It is true that Scotland’s pollution levels used to be higher and it has reduced somewhat over the past two decades.

In doing so however, the Scottish Government have adopted an approach of providing much of our energy needs from green sources, whilst still supporting tax-subsidised North Sea oil drilling and sale of oil to foreign countries, so the pollution is attributed elsewhere, when the oil is burned.

We live in a relatively unpopulated country, meaning we have large swathes of natural land that contribute to CO2 mitigation and reduce our figures in a net carbon model.

The plan was narrowly rejected 45% to 55% because it wasn’t comprehensively convincing, not because it was based on the destruction of our environment.

Whilst the SNP are the party of government in Scotland currently, it has to be said that if either of the two potential alternatives were in power – the Scottish Conservatives or Scottish Labour – that any deviation from a pro-oil stance would be highly unlikely.

It is currently the policy of the Scottish Government to abolish Air Passenger Duty. This policy will make it cheaper for airlines to fly in and out of Scotland, and will reduce demand for greener forms of transport, along with reducing motivation for airlines to use less-polluting aircraft.

This is a clear statement of intent, to put the Scottish economy before environmental concerns.

It begs the question, does the Scottish Government value money above all else?

After reviewing how many lobbyist meetings have taken place in recent years, I would challenge every MSP to address their clear and obvious corruption.

Value does not come
from how we are viewed on the world stage or by others but how we
evaluate ourselves. For that reason, we cannot accept false praise,
generated because we are gaming the system. We must not defend our
government blindly, when it is not working in the interests of its
people, but for commerce.

This is why a Citizens Assembly in Scotland is an imperative, to discuss climate inaction (and indeed to fairly tackle lingering questions of Independence and devolution too).

Holyrood must become the people’s parliament, which it emphatically is not, right now.

We must challenge our rose-tinted view, for our own health as much as for the sake of others. We are already beginning to see huge devastation in Global South countries, which are less polluting but more vulnerable than we are.

To deny it is to condemn huge swathes of the global population to perish, at our expense.

For more information on the latest published statistics (38 pages), from 2016, please see here.