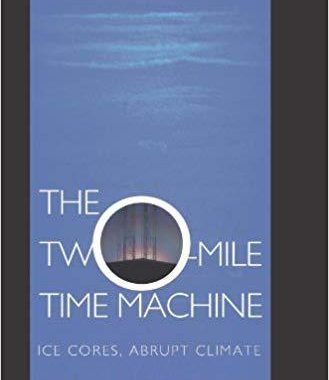 It is scientifically established that our burning of fossil fuels and the resultant carbon dioxide emissions will result in global warming, and ultimately may cause dangerous climate change. But how fast can that happen? The Two-Mile Time Machine: Ice Cores, Abrupt Climate Change And Our Future by climatologist Richard B. Alley, explores climate scientists’ answers to these questions. The author is Professor of Geo-sciences at the Pennsylvania State University in the USA.

Alley is one of the climate scientists who has spent years collecting and analysing ice cores; these are long samples of ancient ice which have been extracted from the two mile thick Greenland ice cap. This massive layer of ice has been forming for over 100,000 years, and is an repository of historical evidence to climate scientists. The snow deposited each year is still visible as layers in the ice, and these annual layers preserve much chemical information from which scientists can extract a record of past snowfall and temperature. Of particular importance is what the ice cores have revealed of the end of the “Younger Dryas” ice age.

‘At the beginning of this book, we met the Younger Dryas, the last cold gasp of the ice age between about 12,800 and 11,500 years ago… Standing in the science trench in Greenland, I measured how thick the annual layers were in the [ice] core across the end of the Younger Dryas. I found that… many thick layers were followed by one slightly thinner layer, one scarcely more than half as thick, one scarcely more than half as thick, another slightly thinner than that, then a lot of similarly thin ones grouped around a spike of thicker ones. This is most directly explained as a twofold change in three years, with most of that change in one year… So I cannot insist that the climate changed in one year, but it certainly looks that way.’ (pages 110-111).

So science tells us that very significant climate change can occur in just a handful of years. Similar warming may well be in store for us, given that our carbon emissions are changing the atmosphere far more rapidly than any natural process has in the past. Alley proceeds to give details of the sudden, extreme temperature change that occurred at the end of Younger Dryas ice age:

The most direct interpretation… is that the surface of Greenland warmed by about 15 F (8 degrees Celsius) in a decade or less. (page 112)

This should frighten us. This sort of warming today would mean the end of the world as we know it. Climatologists estimate global warming of 5 to 6 degrees Celsius today would render most of the world too hot for agriculture (except a narrow northern band comprising Canada, northern Europe, Russia and Siberia). Widespread famine, starvation and war would be the norm. The vast majority of humanity would almost certainly perish.

Alley’s conclusions regarding the climate change which ended the Younger Dryas ice age should serve as a wake-up call. The reason that no action has been taken by governments to reduce carbon dioxide emissions and stop global warming is that climate change is assumed to be something that will happen very slowly, and thus only impact the distant future. However, this assumption is questionable given the findings of the 2018 UN IPCC report, which said that there was only 12 years left to drastically reduce fossil fuel use to prevent global warming of more than 1.5C. The scientific record of the Greenland ice cores shows that when climate change does occur, it can be both quick and extreme. In that case it is not just nameless future generations that our carbon emissions endanger. Rather, our addiction to fossil fuels like oil, coal and gas may well sacrifice the lives of our own children and grandchildren. All of us who wish for a better future than this need to start lobbying our governments and continuously demanding that elected officials quickly replace fossil fuels with solar and wind power.