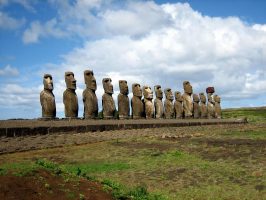 The spectacular statues of Easter Island, a sparsely populated Pacific isle which is seemingly so desolate that there are not even any large trees on it, have been a mystery for centuries. How could an island of a few thousand people produce hundreds of such statues, the largest of which are 33 feet tall and weigh 82 tons? This question inspired Erich Von Daniken, a best-selling author of the 1970s, to speculate that the statues were erected by aliens from outer space. The real story of the statues and the people who carved them are the subject of the first chapter of Jared Diamond’s book, ‘Collapse: How Societies Choose To Fail Or Survive’. Diamond is professor of Geography at the University of California at Los Angeles and author of several award-winning books on the impact of the physical world on human history. His Easter Island history turns out to have profound environmental lessons for us even today.

Diamond points out that archaeologists have proved that Easter Island was once very different from today; before being colonised by people, it was covered with forest typical of other sub-tropical Pacific islands. Once settled by explorers who arrived by canoe from other islands, it seemed to present itself as a hospitable place, and the human population expanded rapidly. Incidentally, this solves the mystery of the statues; a population several times bigger could more reasonably be expected to erect such monuments. However, unknown to the new settlers, the soil of Easter Island was much less fertile than that of other islands that they had lived on. This infertility manifested itself in slower tree growth. Thus when the Easter Islanders cut down trees for firewood, houses and deep-sea canoes, they did this at a rate which may have been sustainable on other islands that their ancestors had lived on; but on Easter Island it brought disaster. As the population grew, people cut down more trees for firewood and canoes. Canoes were necessary as dolphin-hunting provided a large portion of the animal protein in the diet (along with wild birds and other small animals from the forest). But once the forest cover was removed, the exposed land eroded quickly in the rain and wind. Crop yields decreased, and the islanders’ solution was apparently to cut down more trees to plant more crops and build more canoes for dolphin-hunting. As a result, within a few centuries the island was completely deforested. Without trees, there were no more wild birds or animals to hunt, except rats. With no more wood available for canoes, dolphin meat was also no longer available. The islanders descended into famine, war and cannibalism (unfortunately, human meat was one of few remaining sources of animal protein). Two-thirds of the population perished in this terrible manner.

Diamond describes other societies that collapsed primarily due to environmental difficulties, including several more Pacific islands, the Norse colony in Greenland, the native Anasazi culture of the southwestern US, the central American Maya civilisation and modern Rwanda. He also presents the case of Japan, which came close to such a fate but managed to avoid it thanks to intelligent decisions and good leadership.

There is a lesson for us here: in these times of global warming, it may be comforting to believe that our leaders can be trusted to sort everything out, and that humanity would never allow itself to be destroyed. But such a faith would be unfounded; many previous societies have thought this way, and failed. Long-term survival requires a real understanding of the limitations of our environment and a strong political will to live within those limits. Like the first settlers of Easter Island, we find ourselves in a new, unknown environment; namely an industrialised 21st century world with greenhouse gas levels higher than they have ever been in human history. We no longer need to colonise a new island to experience unfamiliar environmental conditions; our carbon dioxide emissions are altering the climate of our whole planet, which will bring unpredictable new risks for everyone. The lesson of Easter Island should make us think on the failure of our own leaders to take real action to prevent catastrophic climate change, even though the latest IPCC report said that only 11 years remain to prevent catastrophic global warming of more than 1.5 C.