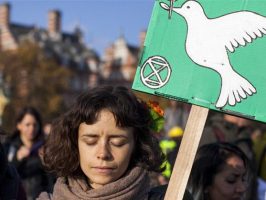 Photo: Ruth Davey/Look Again – Photography for the Wellbeing of People and Planet (www.look-again.org)

Like many in the UK I have jumped feet first into the Extinction
Rebellion movement. It has captured something in the zeitgeist,
bringing together people across cultures and generations in a movement
for fundamental global change. It’s not just about climate change. It’s
about a revolution of love, deep ecology and radical transformation.

There is a long way to go. Victory will be secured over years rather
than months. This is the struggle for the heart and soul of the human
species, not for a quick fix climate solution. But even at this early
stage we are starting to see trends and approaches that are making the
difference – and that show how world-changing movements will operate in
the coming global transition.

The focus on self-organisation releases
untold amounts of energy and creativity. It builds agency and ownership
and avoids the traps and delays of hierarchy.

But this is just the short term. Alongside
this is a much longer term transformational vision, which takes its map
from “the map of the human heart”. This is a vision of radical social
transformation and a rebalancing of humanity’s relationship with nature.
That’s the ultimate goal.

5. At its core this is a profoundly spiritual
movement (with a small “s”). It is jam packed with muslims, sufis,
christians, jews, quakers, buddhists and people of no faith, all
exploring thier common beliefs, beyond religion. What we have found is a
yearning for deeper meaning, for the magic and mystery of life, for a
felt connection to the entire eco-system of this Earth. XR is alive with
ceremony, contemplation and a careful, conscious action in honour of
life, love and abundance. We are becoming nature protecting itself,
experiencing its own beauty and evolving into its higher self.

How this will all play out is not easy to see. The movement in the UK
is taking a pause, to regroup, recuperate and shift to some serious
political horse-trading. What tactics will be needed to bring about both
short-term policy change and long-term global transformation, only time
will tell. But for sure, we’re off to a great start.

As one activist friend of mine, Nikki Levitan, put it:

“At the core of my experience this
last week I see that this is the first ever activism that is heart-led,
no blaming or shaming, just taking action from a place of love and
collective responsibility.
A community of all generations who care and are able to self organise.
It is amazing when humans step out into the world and really do
something and be the change, it unleashes so much creativity,
possibility and courage.”

Mao once said “The Revolution is not a dinner party”. XR is showing it might just start with a street party instead.