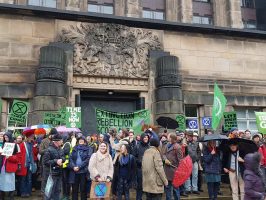 Extinction Rebellion Glasgow formed in November 2018, and took our first actions the following month, including disrupting Christmas shopping by swarming in Style Mile shopfronts, and forcing BBC Scotland to close their front doors due to our Reclaim the BBC demonstration.

XR Glasgow aren’t where we want to be yet, but things are starting to come together and we are on track to deliver a strong contribution during the International Rebellion of 15th–19th April 2019. Affinity groups are forming, with XR Glasgow students organising a Youth Strike on Feb 15th, and XR Glasgow is staging a mass action on March 2nd. So far in 2019, a wide variety of activities have already taken place…

You may have seen XR Scotland’s Rabbie Burns inspired action, in the news recently too, as XR members occupied the Scottish Parliament and conducted the UK’s first ever Citizens Assembly on Burns Day, the 25th of January, with crucial contributions from XR Glasgow members.

I don’t actually know any Burns poems to quote to you and find the language archaic but I’m quite a fan of social commentator and poet, Gil Scott-Heron. He famously said “the revolution will not be televised” but I’m beginning to wonder if he was right about that, as News outlets seemed quite keen to broadcast our recent action at the Scottish Parliament.

Fun Fact: Gil Scott-Heron’s dad played football for Celtic FC in Scotland and was the first person of colour to do so.

You may take our lives, but you’ll never take our treedom!

When faced with the destruction of trees and natural habitat, to make way for building developments on Otago Lane close to her home, XR Glasgow member Cheyenne was quick to react and form alliances with a local ‘Save Our Lane’ group.

“The main criticism involves the destruction of a vital green area that is home to native wildlife such as otters, kingfishers and bats. The area is part of Glasgow’s Green Corridor and hence should be considered a protected nature conservation area. The initial application stated that trees of a certain maturity and height will not be cut down. However, this was not adhered to”, Cheyenne told me.

Glasgow is known affectionately as ‘Dear Green Place’ and wider Scotland fondly referred to as ‘Caledonia’ – the name given to this area by the Romans, due to the vast expanse of woodlands in our region. Sadly we’ve seen our forestry systematically destroyed to a tiny fraction of the size it once was.

As the old song by Dougie MacLean goes: ‘Caledonia, you’re everything I’ve ever had’, yet still we destroy her namesake. Come to think of it, ‘Dear Concrete Jungle’ doesn’t have much of a ring to it either.

Of course, a hard day of action requires time to reflect and rejuvenate and with XR Glasgow’s new ‘Book/Craft’ gatherings, people are able to come together, talk, listen and conduct vitally important talking and making therapy with one another.

“We need to form bonds and care for each other as well as planning actions and creating resources”, group creator, Anna, reflects. “It might also be a focus for people who don’t feel any of the Working Groups are calling to them just now, or are trying to work out how they want to get involved”, she goes on to say, so this event provides a welcoming and inclusive outlet for further discussion.

It’s true also, that some of the younger members, along with their families, have found our way of working hard to fit in with the demands of daily life. XR Member Sapna has developed an inspiring initiative to combat this however, with ‘Wee Rebellion’, an event attended by 250 parents and young people.

“It’s really difficult for parents, teenagers and children to get to meetings in the evenings but because of the way most people’s work schedules function, it’s the obvious time to have meetings to talk about issues and plan actions. Wee Rebellion will attempt to be a space for parents, children and young people to talk to each other about how they can engage with XR and to generally raise awareness about climate change with the hope of finding shared vision for change. At our first event, among other activities, there will be a discussion space for adults asking what are the barriers to participation for caregivers and what strategies can we collectively come up with to overcome them”, Sapna tells me.

Although there are challenges to overcome, fortunately it’s now fairly easy for me to keep abreast of environment news, thanks to the new ‘Glasgow St’ online briefing paper. The brainchild of XR member Thomas, ‘Glasgow St’ has clear principles, which set it apart.

Being over-reliant on traditional media for your climate news may not be the wisest decision. With climate lobbyists and business interests attempting to influence the agenda, we must analyse and scrutinise it ourselves. G-Street’s wiki approach allows for a collective learning experience, which I’m sure will prove valuable to the whole XR movement. Users of Medium – take a look and contribute.