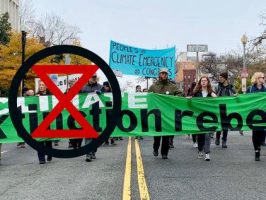 Yes, yes, I know. The climate is breaking down. It’s urgent. An emergency. We’ve only got a few years left to ‘fix’ it.

Indeed, we won’t fix it. Weather patterns will become increasingly unstable and unpredictable, and the effects it will soon have on how humans around the world grow food will be devastating, likely causing harvests to fail across entire continents and food prices to sky-rocket. Millions have already suffered due to the amplified instability. We’re facing imminent societal collapse (whatever that means), both around the world and in the UK. All of our lives are soon going to radically change.

None of this is particularly controversial. When a bus is driving with a certain momentum towards a person, it gets clearer and clearer that it will hit the person. After a certain point, it’s inevitable. And that’s where we stand now, with regards to the momentum of climatic change. The bus is about to hit us. Our lives are about to change. It’s not clear whether or not we’ll survive (as a species). Many species have already been run over. Two hundred species each and every day go extinct.

I’ve been with Extinction Rebellion (XR) from the start. I was one of the 15 people in April 2018 who came together and made the collective decision to try to create the conditions that would initiate a rebellion. I was a coordinator of one of the original five working groups, and I’ve been organising with XR day-and-night since then (frugally living off my savings so I don’t have to work, having quit an industry that paid me £1000/week). And I’ve been in RisingUp (the organisation from which XR has emerged) since the first RisingUp action in November 2016. I’m a RisingUp Holding Group member, and a member of the XR Guardianship Team.

And for the sake of transparency: that previous paragraph is all about me ‘pulling rank’ — I’m trying to convince you to listen to what I have to say…

And I’m here to say that XR isn’t about the climate. You see, the climate’s breakdown is a symptom of a toxic system of that has infected the ways we relate to each other as humans and to all life. This was exacerbated when European ‘civilisation’ was spread around the globe through cruelty and violence (especially) over the last 600 years of colonialism, although the roots of the infections go much further back.

As Europeans spread their toxicity around the world, they brought torture, genocide, carnage and suffering to the ends of the earth. Their cultural myths justified the horrors, such as the idea that indigenous people were animals (not humans), and therefore God had given us dominion over them. This was used to justify a multi-continent-wide genocide of tens of millions of people. The coming of the scientific era saw this intensify, as the world around us was increasingly seen as ‘dead’ matter — just sitting there waiting for us to exploit it and use it up. We’re now using it up faster than ever.

Euro-Americans violently imposed and taught dangerous delusions that they used to justify the exploitation and reinforced our dominance, while silencing worldviews that differed or challenged them. The UK’s hand in this was enormous, as can be seen by the size of the former British empire, and the dominance of the English language around the world. There is stark evidence that everyday racial bias continues in Britain, now, today. It’s worth naming some of these constructed delusions that have been coded into societies and institutions around the world:

There are other delusions. These delusions have become ingrained in all of us, taught to us from a very young age.

None of these delusions have ended, although some of the arguments that supported them (e.g. phrenology) have been dispelled. They continue to play out through each of us, in our ways of relating, regardless of our identity. The current pride in the history of the British empire, or the idea that the USA is on the side of ‘good’, continues to enable neo-colonialism in 2019, taking the form of palm-oil plantations, resources wars, and the parasitical financial sector, to name but a few. The task of Extinction Rebellion is to dispel these delusions. We need to cure the causes of the infection, not just alleviate the symptoms. To focus on the climate’s breakdown (the symptom) without focusing attention on these toxic delusions (the causes) is a form a denialism. Worse, it’s a racist and sexist form of denialism, that takes away from the necessary focus of the need for all of us to de-colonise our selves.

My ancestors are European, some of whom claimed to ‘own’ people as slaves. There are black people with the name Basden in the Americas, and I have begun to mobilise my (white) family to make contact in order to seek to pay reparations.

So Extinction Rebellion isn’t about the climate. It’s not even about ‘climate justice’**, although that is also important. If we only talk about the climate, we’re missing the deeper problems plaguing our culture. And if we don’t excise the cause of the infection, we can never hope to heal from it.

This article is calling to all of those who are involved in XR who sometimes slip into saying it’s a climate movement. It’s a call to the American rebels who made a banner saying “CLIMATE extinction rebellion”. It’s a call to the XR Media & Messaging teams to never get sloppy with the messaging and ‘reduce’ it to climate issues. It’s a call to the XR community to never say we’re a climate movement. Because we’re not. We’re a Rebellion. And we’re rebelling to highlight and heal from the insanity that is leading to our extinction. Now tell the truth and act like it.

* I use the term ‘insanity’ carefully, with the intention of highlighting the need for healing. Indigenous First Nation people helpfully taught me to see the mindset of the coloniser as a sickness. In no way do I intend to marginalise or discredit the experience of people who have been labelled ‘insane’ by a normative system, nor who identify as being ‘insane’.

** Climate Justice refers to the injustice that those who are affected first and worst by extreme weather events (the people in the poorer countries, the majority of whom live in the Global South) are not likely to be the ones who caused the climate emissions (the people who consume the most, including the pathologically wasteful cultures of Europe and Turtle Island (aka North America), and the rich who live/travel around the world). 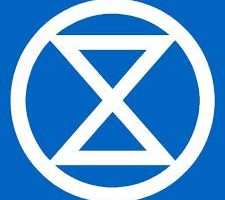 Bio: Ian Paterson is a Medical Repatriation worker from Glasgow, who enjoys eco travel blogging, being working-class, avoiding capitalism and saving the planet.

The sneering comes in the undertones of commentators, whilst offering their dissection of our movement. We are an ‘activist elite’, they intimate – a posturing group without diversity.

‘Climate Change is Firing Up Middle Class Activism’, screams the headline in the FT (Dec 9th) in Pilita Clark’s sweeping analysis. Although it’s warming to read that she knows personally of two separate individuals with no history of activism, who are now “part of a burst of middle-class climate activism that has few precedents and no famous leaders”, it is a mixed message that contains a subtle sour aftertaste.

Meanwhile in Glasgow: I’m sat in my second Extinction Rebellion meeting, held within one of the great Glasgow University’s lecture rooms. Whilst sat in the 24th best university in the UK – an establishment I could only have wished to attend – I look around me. It is not class that unites us, of that I am certain.

I was brought up by a single mother on benefits and was unfortunately expelled from school at age 14, for truancy. I found it hard to focus on educational matters during teenage development but it always seemed oxymoronic to remove me for not attending. And so began an unqualified working-class life of dead-end jobs; retail, offices, targets and sales.

Around six months ago and after a two decade long battle with enforced capitalist employment, I finally found myself settling into a job role which focused on my passions and helping people, as a Medical Repatriation Consultant. I immediately saw a change in my behaviour. I started to donate blood, began to help migrants, joined leftist people-power campaign group Momentum, and I joined Extinction Rebellion.

As I glance back around at my colleagues in our Glasgow University meeting room, I see doctors, nurses, students, Green Party, SNP and Labour employees, recycling industry workers and the unemployed. What unites us is not class but a detachment from Capitalism.

Doesn’t the economic system, which dominates our industry, promote selfish, irresponsible, instant gratification? Doesn’t removing yourself from that system help people return to their natural state of cooperation, altruism and empathy?

Back in the media: “What relationships do you have with front-line communities in the global south, indigenous communities and how are you acting in solidarity with them?” Dalia Gebrial (Oxford Uni, LSE) poses in an interview with Novara Media (Nov 26th). It strikes me as unusual that editors working for Novara, are channelling questions through the host, when a multitude of questions from the general public await and go unrepresented throughout the interview. Echoes of Alex Salmond’s staff, influencing debate on his TV show, spring to mind.

“Do you not think it’s precisely the problem, saying that we need the global south to join us, rather than them leading the movement” Clare Hymer (Novara, Momentum, Warwick Uni) goes on to add in the same interview, suggesting a colonial superiority forms part of the tone of Extinction Rebellion.

The interview culminates in the host, Michael Walker attempting to salvage balance, in saying “it’s all very well pointing out the limitations of a movement, but what’s the value of critiquing the movement… do you think there’s actively something bad going on with Extinction Rebellion?”. No charges are filed.

How exactly Hymer and Gebrial expect the global south to lead on this matter is not offered during this interview – only critiqued. If you look at global south nations’ emissions, they are often dozens of times less polluting than Western countries’ are, and the global south generally has far less opportunity, infrastructure and empowerment to tackle climate issues.

All we can do is offer Novara the benefit of the doubt; that these academically wealthy, New Media journalists are attempting to provide a voice to the voiceless. And indeed if that is the case, then I’d welcome them to share this article, as it was written by a working-class nobody, from a city with the lowest life-expectancy in Europe, devoid of educational opportunity and without voice in the media.

In the face of critical comments, I see Extinction Rebellion colleagues listen intently, in an effort to use all this information as constructively as possible and my hope is rekindled.

As Gillet Jaunes have just won their minimum wage increase and workers’ rights, our attention should turn to winning an even greater prize in planetary survival, through the immeasurably more ethical means of non-violent direct action.