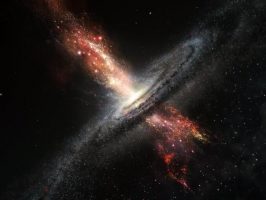 Existence is Rebellion: A Regenerative History of the Universe

Two: The Birth of Galaxies

[All quotes and information below are sourced from the website of the McDonald Observatory in Austin, Texas: ]

The Hubble Space Telescope and other measuring tools have shown the first galaxies took shape from around one billion years after the Big Bang or the Original Rebellion, as you might call it.

There are two main theories to explain how the first galaxies formed. The truth may involve both theories.

One theory says that galaxies were born when massive clouds of gas and dust collapsed under their own gravitational pull, allowing stars to be created.

The other theory says the young universe contained many small “lumps” of matter, which coalesced to form galaxies.

Every galaxy is a rebellion, because before galaxies, there were no galaxies. Extinction Rebellion is just such a galaxy.

According to the McDonald Observatory, ‘The galaxy-formation process has not stopped. Our universe continues to evolve. Small galaxies are often pulled into larger ones.’

Extinction Rebellion attracts other smaller social movements, gives them a platform and a new, larger centre of gravity.

‘Galaxy mergers happen fairly often. A large portion of the bright galaxies that we see today may have formed from the mergers of two or more smaller galaxies.’

Extinction Rebellion joins in solidarity with other global non-violent direct action movements for ecological and social justice, like Youth Strike For Climate and Earthstrike. Together we can form one uber-movement.

‘Mergers can take anywhere from a few hundred million to a few billion years to complete. They can trigger intense bursts of new star formation’.

Extinction Rebellion is making stars of all of us, but let’s not take too long about it!

‘Galactic collisions rarely produce head-on wrecks between individual stars. Even when two galaxies ram together, the distance between stars is enormous’

Extinction Rebellion and every other global non-violent direct action movement can work together without anyone getting hurt.

‘While galactic collisions rarely destroy stars, they often create them. As vast clouds of gas and dust in merging galaxies slam together, they can create thousands or even millions of new stars.’

The more Extinction Rebellion joins with other movements, the more new volunteers will appear in all movements.