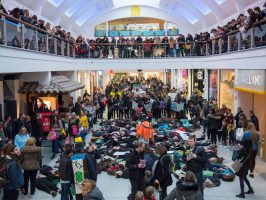 Claudia
Fisher is a married business woman and artist. She has five children
aged 32 to 13 and is studying part-time for an MA in Creative Writing at
The University of Brighton. For the next couple of months, she will be
writing a weekly blog on the BPEC website about environmental issues,
particularly focussing on climate change and biodiversity loss. Claudia
does a lot of work with the newly formed civil disobedience group Extinction Rebellion. In this blog she will share her journey with you, in the hope that you will join her. Thank you for reading.

I have a question for you.

What
prompts a middle-aged woman who has never participated in any form of
activism before to throw herself wholeheartedly into civil disobedience
and more? The answer is simple.

These are the words of a 16-year-old student, Greta Thunberg.
What does Greta mean? Our house is on fire? Let’s start with that
image. What would you or I if we knew our house was on fire? Make a cup
of tea and wait to see if the flames caught hold? Let the children sleep
upstairs for fear of frightening them unnecessarily? Walk off and leave
it, hoping it would put itself out? No of course not. That would be
ridiculous.

I am
pretty confident that the first thing every one of us would do is wake
the children and get them out as quickly as possible. We’d pick up the
phone and dial 999. We’d shout ‘HURRY!’. We’d put the hose on and fill
buckets with water. We’d form a chain gang with our neighbours. In
short, we’d do anything we could to dampen those flames.

Let’s
go back to Greta, whose one-woman school strike for climate has captured
the imaginations of hundreds of thousands of young people across the
world.[ii]
For months Greta skipped school every Friday, preferring to sit outside
the Swedish Parliament on her own, rather than be with her friends in
class. She explained that the world was facing such a dire and urgent
climate emergency, she saw no point in studying for a future she would
never have.

She
explains that we, the human race, are facing climate breakdown with
wildfires, flooding, droughts, rising sea levels and heatwaves. The
planet is entering the world’s sixth mass extinction with around 200 species estimated to go extinct each and every day.[iii]
And what are we doing? Pretty much nothing. We all carry on as before
and think people like me are extremist, alarmist, totally off their
rockers. Or we notice it’s a bit hotter than usual, but that’s nice
isn’t it, in a country where traditionally the weather is a bit rubbish?
We can start producing wine now. So, it’s not all bad. And anyway, what
can we do about it? We all have to live, don’t we? We have to eat and
get about and have fun? We don’t want to stop all of that, because isn’t
the kind of easy living we are used to what it’s all about? Well, the
answer is, we have to stop. We have to think. To assess. To evaluate.
Then we have to act. We have to. Because this is not sustainable. It
cannot last.

Every day nearly 100 million barrels of oil are extracted from the ground.[iv]
That is energy made billions of years ago. Yet we dig it up, harness
its energy and release its by-products. Like Pandora’s Box, we let it
out and can’t put it back. I tell my children that their actions have
consequences. Yet I have been guilty, and still am guilty, of taking
actions and making decisions that will have consequences, not
necessarily for me, but for generations to come.

Ask any
ecologist and they will confirm that this beautiful blue planet of ours
has a finely balanced eco-system that has evolved over a very, very
long time. I think understanding just how long really helps with getting
a handle on how serious this situation is.

As part
of my MA in Creative Writing, last year I wrote a piece about a
three-hour period where, as a result of severe sleep deprivation and
stress at my son’s serious illness, the balance of my mind was briefly
overturned. In order to reconcile the significance of those three hours
with the greater scheme of things I started researching. Trying to
understand time. For me those three hours felt like an eternity. But
what does eternity really mean? This is what I found out, and be warned, you could find it quite mind-blowing.

‘If
the Earth formed at midnight and the present moment is the next
midnight, 24 hours later, modern humans have been around since
11:59:59pm—that’s 1 second.’[v]

And in
all that time, in the 23 hours 59 minutes and 59 seconds of all
existence, the world’s ecosystems could get along with their business of
generating, living, evolving, dying and starting over again
uninterrupted. Then we humans came along.

‘And if human history itself spans 24 hours from one midnight to the next, 14 minutes represents the time since Christ.’[vi]

But for
23 hours 58 minutes 36 seconds of that one second of the previous
24-hour clock, humans were part of the ecosystem. Spending every second
surviving. Living amongst all other life. It is really only in the last
two hundred years, since the beginning of the industrial age that we
have had any kind of impact on our environment. This is equivalent in my
illustration to 1 minute and 24 seconds of a 24-hour period that has
been expanded out of one second of another 24-hour period.

Think
about it. That kind of time span, a mere 200 years, in comparison to
life on earth is equivalent to a fraction of a blink. And the scientists
tell us we have only 11 years left to change our ways, before global temperatures breach the 1.5ºC guard rail.[vii] Beyond that we will have an unstoppable increase. Temperatures of 2-5ºC will cause famine, mass migration, wars and societal break down. Life will at best be miserable, at worst unsustainable.[viii]

Just 11
years. To stop carbon emissions. To clean up our act. Going back to my
illustration, 11 years equates to a mere 4.62 seconds of a second in 24
hours. Which is why waiting till climate change hits home, waiting for
governments to do something, waiting for the changes to be unstoppable
just isn’t an option. The UK government have pledged an 80% reduction in
carbon emissions by 2050. If this target wasn’t so tragic it would be
laughable. It’s like pouring a thimbleful of lukewarm water onto that
house fire and expecting that drop to make a difference.

We need
to act like our house is on fire. Because it is. And this middle-aged
woman for one is not going to stop until that fire is out. Totally out. I
will risk my losing my comforts, my freedom and my life. It is too
important to stand by and do nothing. Because the fire is taking hold of
the ground floor. The flames are licking up the stairs and my children
are sleeping in that house. I need to get them to safety.

More next week about my entry into a different world of possibilities and hope.