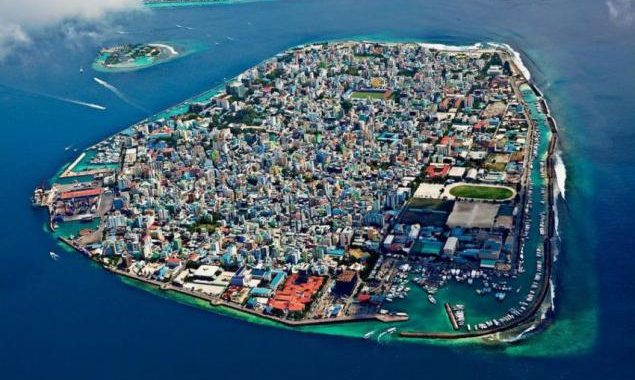 Farewell post from Kate Goldstone -thanks for all your help, Kate!

You think you’ve got it bad living on the mainland, or inland, or in a country within a continent. But plenty of small island nations, known as SIDS or Small Island Developing States, are a whole lot more vulnerable to our fast-warming climate than most.

There are several reasons for this unusual level of vulnerability. According to Wikipedia (1), SIDS ‘tend to share similar sustainable development challenges, including small but growing populations, limited resources, remoteness, susceptibility to natural disasters, vulnerability to external shocks, excessive dependence on international trade, and fragile environments.’ And all that means a growing number of them are set to disappear completely as sea levels inexorably rise.

How would you feel if your homeland was about to disappear?

Imagine you’ve been born and bred in a small island state, nurtured by it all your life. Because you know the place so intimately it is deeply familiar. Because you eat local foods and drink local water the land is quite literally in your bones, in your teeth, and you feel a soul-deep love for your homeland. But your island is sinking beneath the waves, you’re powerless to change the inevitable, and you and your family are in a state of horrified, shocked mourning. There goes your culture, your history, your ancestors, everything familiar.

Can you imagine how dreadful that feels? Can you picture how frustrating it must be when nobody can really help? There’s nothing that any of you, the residents of your magical archipelago, can do to stop the waters rising. Would you blame the wealthy, greedy people, the people far away who warmed the earth in the first place? Probably.

Global warming and rising sea levels are threatening many SIDS, by their very nature first in the firing line, barely above sea level with little or no high ground. Most have fragile economies sustained by tourism and international trade. Many have under-developed infrastructures. And the people quite literally have nowhere else to go as the waters flow steadily higher. Here are just a few of the world’s many SIDS that are currently at risk of vanishing for good. (2)

The Republic of Maldives – Due to disappear under the waves

The Republic of Maldives covers an area of just under 300 square kilometres and lies to the south of India. Once colonised by the Portuguese, Dutch and British, now it’s an independent republic. Sea level rises are placing the nation, its people and economy at terrible risk, the islands being some of the lowest-lying on earth. At a maximum height above sea level of 2.3 metres, many of the 1200 tiny islands and atolls that make up this magical place are already going under.

The Solomon Islands – Under serous threat from the seas

Independent from Britain since 1978, the people of the Solomon Islands, in the Indian Ocean, have been warning us for several years that sea level rises will destroy their world, but the world hasn’t listened. Climate change is set to destroy this tiny yet precious place over the next couple of decades, sinking a total of just under 1000 islands across two unique archipelagos.

The remote Republic of Kiribati covers an epic three million square kilometres of the Pacific Ocean to the north east of Australia, the place where the New Year is celebrated first of all, before it reaches the rest of the world. Independent from Britain since 1979 it’s at special risk of sea level rise, being just 3m above sea level. The waters are currently rising by more than a centimetre a year, not a lot by some standards but four times faster than the global average. This means lovely Kiribati will probably completely disappear before too long, losing 33 precious coral atolls and one island forever.

The UN pinpoints the Republic of Vanuatu as the world’s most vulnerable island nation to every type of natural disaster. The nation covers just over 12,000 square kilometres and has been a new, independent state since 1980, now completely separate from Britain and France. Sea level rise here is already a problem, but the place is also especially vulnerable to increasing numbers of cyclones of increasing strengths. Take cyclone Pam, which trashed all but 10% of the buildings in the capital. 83 stunning volcanic islands make up the nation, and they are all at risk from sea level rise.

Tuvalu is another island nation already suffering more than average from the ravages of global warming. Tuvalu is the world’s least polluting country, but at the same time has an incredibly low average height above sea level. Independent from Britain since 1978 and close to Vanuatu, it was also severely damaged by cyclone Pam and is set to disappear thanks to global warming. That means four Pacific coral reefs, five atolls and three islands are set to vanish from the face of the Earth before long.

Is there any good news for SIDS?

We’re at crisis point, and no wonder so many SIDS are so keen to move towards low-carbon, climate resilient economies, as set out in the Caribbean Community (CARICOM) implementation plan for climate change-resilient development.

On the other hand unless the rest of the world dramatically and quickly reduces its reliance on fossil fuels and slows climate change island nations, no matter how renewable their energy, will remain powerless to prevent the waves rising. In the same way that no man – or woman – is an island, island nations depend on the rest of the world for their survival and we can’t separate our fates.

While places like the Caribbean can go ahead and create renewable energy until they’re blue in the face, because the rest of the world is fiddling while Rome burns, they’re stuffed. And that’s everyone’s responsibility.

As always, the solution rides on the political will of the leaders of wealthier, more influential, larger countries and the larger economic groups they fall into, ‘organisations’ like Europe and OPEC.

Join Extinction Rebellion! Using non-violent direct action and mass civil disobedience, we are pressuring governments to reduce carbon emissions to zero by 2025. Will you join us, in love and peace, to save the human race, give our children a future, and protect our fellow creatures?