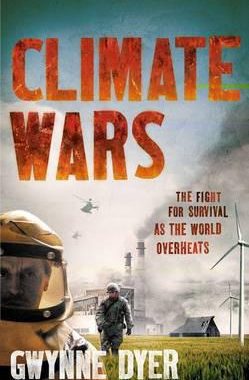 Climate Wars: The Fight For Survival As The World Overheats by Gwynne Dyer investigates the worst case scenarios of global warming, via studies done by and interviews of risk-assessment professionals at the Pentagon and defence policy think tanks. It does not make for reassuring reading. As the world heats up, the tropical and sub-tropical regions of Asia, Africa, Central America and South America are likely to become hotter and more arid; this is likely to decrease agricultural productivity and food production in these densely populated regions. The outcome could be a new age of warfare.
One possible location for conflict identified by Dyer is South Asia, where many of Pakistan’s rivers are reliant on sources in the Indian Himalayas. Due to global warming, the overall climate of the region is likely to become more dry and arid. This could spark increasing tension between India and Pakistan over the water in their shared rivers, possibly ultimately resulting in warfare between these two nuclear-armed states. This analysis of conflict potential also holds true for India and Bangladesh; however, since Bangladesh is not a nuclear power, the prospect of nuclear warfare between these two countries does not arise.
Another frightening possibility is of a Russia-China war. China is likely to become hotter and drier as global warming progresses. This is likely to affect water availability and agriculture, a major concern for a country of over a billion people. This may fuel expansionism on the part of China with the goal of controlling more land for food production. Any such expansionism might result in warfare with Russia, the dominant power among the ex-Soviet republics in the region.
These concerns seem remote in today’s world, where the worst case scenario for a bad crop in any country is increased food imports. However, the worst case scenarios of global warming inevitably involve a hotter, drier globe with less productive agriculture closer to the equator. In this scenario, it is not clear where the required shortfall in food will be produced, and whether there will be enough to go around. It seems that we may be living in an age of plenty which will be cut short by climate change. Life on a warmed globe means an age of scarcity, and increased risks of conflict.
By far the best outcome for everyone would be if governments around the world prevented global warming by real measures to cut carbon dioxide emissions. This requires taxes on fossil fuel use, and reinvesting the tax proceeds in renewable energy such as solar and wind power. Unfortunately, the governments of the world are still dragging their feet rather than taking real action, even though the UN IPCC report of 2018 made clear that there are now only 11 years left to cut carbon emissions and prevent potentially catastrophic warming of more than 1.5degrees Celsius. Further delay could well doom us to a future of climate warfare.